Classically trained fiddle-player John Showman is the co-founder of two thriving and stylistically contrasting Toronto-based bands – the Foggy Hogtown Boys (bluegrass) and the Creaking Tree String Quartet, whose latest CD, a hybrid of roots, bluegrass, jazz and classical music, has been nominated for two 2011 Juno Awards. More recently, he founded the indie-country band New Country Rehab, which released its first CD in January.

Anita Malhotra spoke to Showman, who was at his Toronto home, by telephone on Tuesday, February 8, 2011.

AM: How did you get started on the violin?

AM: Tell me about your early violin training. 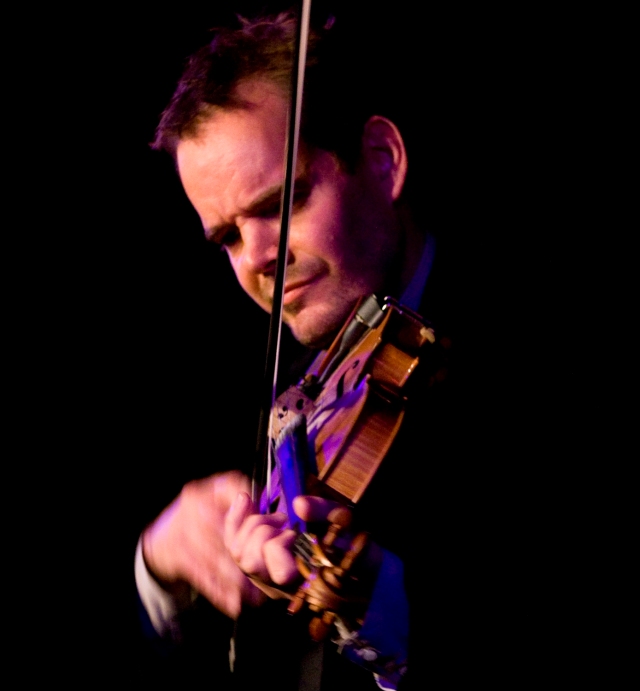 Showman: I don’t remember my first teacher really well at all. I do remember a teacher I had in high school whose name was Vic Pomer, and he was very good. I was with him for five years. He was a crusty dude from Winnipeg who was just cool enough that I respected and feared him. He went to one of the big Russian schools in Kiev, where he mastered the real classical technique. And he taught me all the units of playing. He would break down technique into little pieces and would teach me those one at a time, like building blocks. I got a really good education from him in how to play classical violin, and I was able to apply those techniques to pretty much everything I do.

AM: What did you do after high school?

Showman:  I went to Indiana University in the States to study music, and I was there for a year and a half. And then something broke inside of me and I realized I didn’t enjoy it. I gave it up for dead, and got a degree in business. I didn’t touch the violin for three years. It was too expensive staying in the States, so I came home to finish my degree in Montreal. And then, after I had completely gotten any thoughts of ever playing music again out of my head, I met somebody in Montreal who said I should do some jamming, and I picked it up again. I didn’t have any desire to play classical music, or any hang-ups. It was just fun. I didn’t think I was actually going to make a living doing it.

AM: How did you get involved with the Creaking Tree String Quartet?

Showman:  I moved to Toronto on April Fool’s Day of 2001. The day I was moving there, a guitarist I knew, Brad Keller, was putting together this recording session with some friends of his. He had different projects: an electric project with a drummer and a bass player, and then that same bass player also wanted to play some double-bass. The day they were getting together I just happened to call Andrew Collins, who played mandolin, and said, “Why don’t you just come over and sit in for a bit?” And he did, and we made a demo. It was a really good session, and the demo was good enough that it got us a Canada Council grant to record an album.

The Creaking Tree String Quartet at a taping for the CBC Radio One show Fuse on Jan. 12, 2007 (photo by Bouche – Flickr Creative Commons)

AM: How would you describe the style of the music that you do with Creaking Tree?

Showman: I’d call it acoustic, instrumental kind of fusion. We write whatever we want, mostly melody and rhythm-based music. But the influences are from all over the map. So it’s pretty heady, but we really try to focus in on the melody and making it palatable.

AM: Is the music improvised?

Showman:  At the time it was pretty highly improvised. Now that we’ve played it so much and recorded four albums, I tend to play my solos more or less the same most of the time. But there’s still kind of a spirited improv. There’s nothing really written in stone about the way we play.

AM: Tell me a bit about Sundogs, the CD that’s been nominated for two Juno Awards this year. Is it similar in style to the band’s previous CDs?

The cover of “Sundogs,” the Creaking Tree String Quartet’s most recent CD, which has been nominated for two 2011 Juno awards

Showman:  Yes, very much so. It’s a little broader in focus sonically just because we used a few guests on the album:  two guest percussionists / drummers, one guest piano player, and a guest on steel guitar – pedal steel. Also, Andrew and Brad both played electric instruments for a couple of songs. It seems to be our most focused album because all the tunes are very distinct and they’re all fairly simple. Instead of trying to mix a million styles in one song, we wrote a bunch of different tracks, each fitting to a particular genre.

AM: How did you get involved with the Foggy Hogtown Boys? 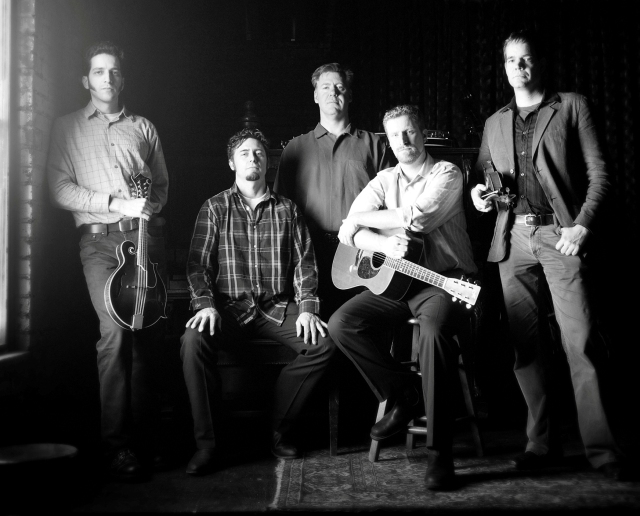 Showman:  In December of 2001 I got a call from Chris Coole, the de facto band leader of the Foggy Hogtown Boys, and he asked me if I wanted to form a bluegrass band. He was already doing the famous and to this day ongoing bluegrass jam at the Silver Dollar every Wednesday night that I would sometimes go to. So we decided to form a side project – another bluegrass band. That came together, and we’ve been a band ever since. I’ve been lucky to be in two bands that have endured.

AM: How did the band get its name?

Showman: If you look through the history of bluegrass, you’ve got the Foggy Mountain Boys, you’ve got the Sunny Mountain Boys, you’ve got the Greenbriar Boys. There are all kinds of funny hillbilly names . They name themselves after some local landmark, I guess – some kind of physical definition of whatever region they’re from. So in our case, Toronto used to be called Hogtown, and for one reason or another we all used to feel somewhat foggy at times, so we called ourselves the Foggy Hogtown Boys. We all work pretty hard at playing as well as we can. We’re trying, at least in our minds, to compare ourselves to all the great American bluegrass bands. That’s what we’re striving for, anyway.

AM: Tell me a bit about the history of bluegrass.

Showman: In the 1940s, Bill Monroe  – he calls himself the father of bluegrass music and there aren’t a lot of people who would argue –  was an ambitious country boy from Kentucky who had figured out how to play mandolin, but was also really into fiddle and banjo. He had an uncle who played fiddle, and he saw a lot of travelling “Negro bands” and string bands back in the day. He had this huge infusion of folk music and stuff, and wanted to make it into something.

So he decided that instead of having the traditional approach where people would just sing the songs and play the tunes over and over again, he’d make a show about them – he’d actually tightly arrange them. Instead of having three fiddles and two banjos, he’d have one of each instrument and make this actual showcase band – a five-piece band. And it was a bluegrass standard for a long time: mandolin, fiddle, acoustic guitar, five-string banjo and double-bass.

He travelled around with a tent and with a crew, and put on variety shows. This was in the ‘40s and ‘50s, so he made bluegrass into a sort of hillbilly entertainment. Then he got a slot on the Grand Ole Opry, which gave him even bigger access. So he really did invent this whole style of music in a lot of ways. He’s at least responsible for it becoming as big as it did. It’s a very interesting, weird style of music.

AM: Can you tell me about the Foggy Hogtown Boys’ latest CD, Scotch and Sofa?

Showman: It’s probably my favourite of the ones we’ve done. We’re lucky that one of the guys in the band – Andrew Collins, the mandolin player – is a really good engineer. He recorded our last three albums. I think what set this album apart was that we decided that we were going to really try to get our own sound. Chris Coole is a really accomplished acoustic guitar player, but he’s also a great old-time Appalachian-style banjo player, and that’s very different from bluegrass style. We would often go from one style to another in shows, playing between the more rootsy or folksy old-time sound and then the bluegrass sound. And so we decided to do that in this CD, and I think it was successful.

AM: The Foggy Hogtown Boys have a regular three-hour Saturday afternoon gig at the Dakota Tavern in Toronto. Do you ever feel like you might run out of material? 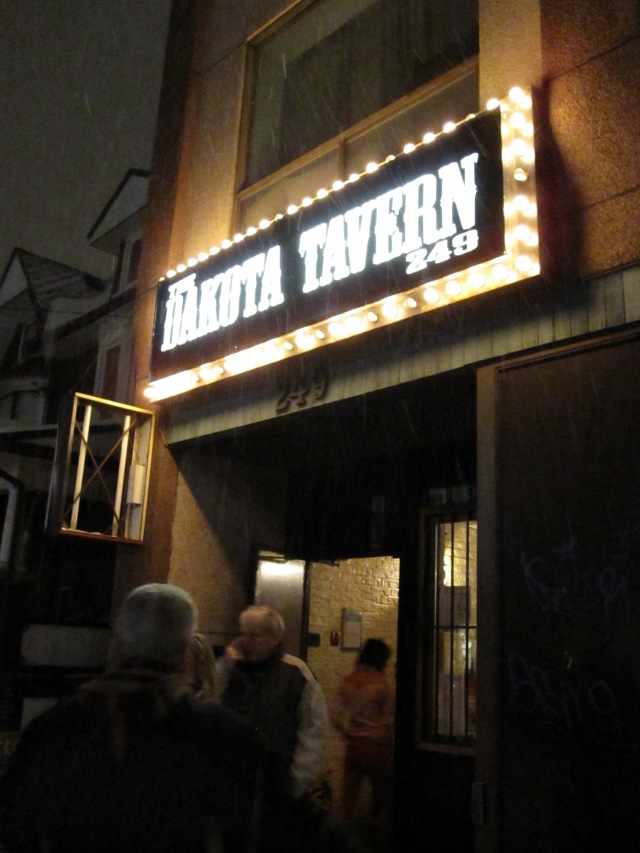 Patrons outside Toronto’s Dakota Tavern after hearing an afternoon of the Foggy Hogtown Boys on Feb. 5, 2011

Showman: I’d say we probably have 15 to 20 original songs, and then we know 40 classic bluegrass instrumentals, and I’m being conservative. And in terms of songs, three digits easily. There are tons and tons and tons of bluegrass songs. I mean, people would do covers of country songs and turn them into bluegrass songs. There’s just so much music so we never really fall short of material. I’d say we probably add a tune every three weeks.  So by the end of a year we probably added 15 new tunes, and the oldest 15 tunes slip away into our subconscious. It’s a slowly and constantly evolving repertoire.

AM: Tell me about your solo album.

Showman:  I wanted to make a fiddle album – just something I could sell from the stage and use as a calling card for people who wanted to know what kind of fiddle music I played.  I wrote nine fiddle tunes, found a few other traditional ones that I really liked to play, recorded them, and put them on an album. That came out in November of ‘09.

AM: A question I hear often is, “What’s the difference between a violin and a fiddle?” I know the actual instrument is the same, but what are some of the differences in techniques?

The Foggy Hogtown Boys at the Dakota Tavern on Saturday, Feb. 5, 2011

Showman: I don’t like to get into, “What’s this called and what’s that called,” because I knew a classical player who called the instrument a fiddle. The style of playing I do is really different from anything classical. The country and bluegrass styles are very different. Then there’s also jazz fiddle and swing fiddle, which are maybe a little closer to classical just in the way they’re played. Then you have Irish music. I’m simplifying here, but Irish music is the most different of all of them in a lot of ways. People even hold the bow quite a bit differently. Then there’s old-time Appalachian music and that’s really different – people tune the fiddle differently.

AM: What are some of your upcoming projects? 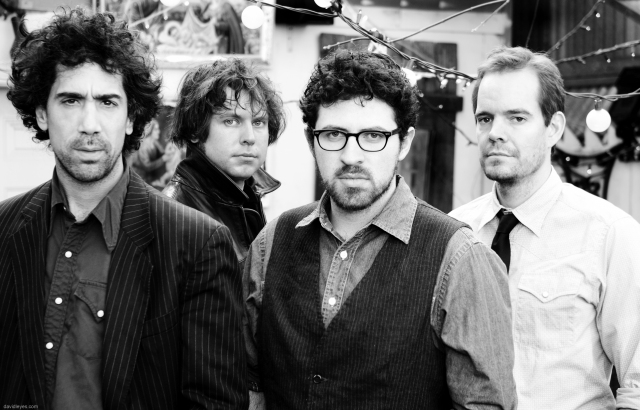 Showman:  I started a band called New Country Rehab, and that’s quite different from the other bands I’m playing with. I’d say I’d call it indie-country – part indie rock, part country. This year I’ve been doing a lot of work getting that off the ground. And we have a pretty busy summer ahead of us.

AM: Where is the band scheduled to play this year?

Showman: So far we’re playing at the Winnipeg Folk Festival, Vancouver Folk Festival, Blue Skies Folk Festival, Harrison Hot Springs Festival, Calgary Music Festival, and a few other places. We did an album launch a few weeks ago at the El Mocambo here in Toronto, which is a big, storied rock bar.  It was great. We packed the place over-capacity and had a line-up – we turned a lot of people away. Too bad for them but good for sales, I suppose.

1 Response to INTERVIEW WITH JOHN SHOWMAN