Born and based in Barcelona, BTOY (Andrea Michaelsson) has been creating her distinctive stencil-based art since the early 2000s, first in collaboration with artist Ilya Mayer and now on her own. Her posters, murals, prints and canvases – many featuring female pop-culture icons – can be found in the streets and galleries of Spain, all over Europe, and in Latin America and Indonesia.

Anita Malhotra interviewed BTOY at her studio in Gràcia, Barcelona on February 24, 2012.

BTOY (Andrea Michaelsson) on the terrace of her Gracia, Barcelona studio with her stencil works of Gary Cooper, Natalie Wood and Dolores Costello (photo by Anita Malhotra, February 24, 2012)

AM: Tell me about your early experiences making art.

BTOY: I started to paint 10 years ago. For me painting is an escape from my stress. It completely distracts my mind.

AM: How old were you?

BTOY: I was 26. My mother died and I started to paint.

AM: What were you doing before that? Were you studying at a university?

BTOY: Yes, I studied law for four years and after one year I thought, “This is not my career. I think I’ve made a big mistake.” So I changed. I started to study photography and I was in a professional school of photography for three years. Photography was the basis of my painting. I always use photographs when I paint.

AM: Tell me about your early painting and your early photography. What were you portraying?

AM: Why were you attracted to the images of these actresses?

A photograph of Elizabeth Taylor as Cleopatra inspired this street art work by BTOY in London, England (photo by Mermaid99, Flickr Creative Commons, May 6, 2009)

BTOY: I liked these women because they were the first liberated women – flappers. For me, these women are very important.

AM: How did you combine photography and painting?

BTOY: I started by using Photoshop, and then drew the image, and then used stencils and paint. Now I’m using Photoshop less because I can see the difference between light and shadows more easily. Now when I use photographs I start to draw right away. At the beginning I completely needed Photoshop.

AM: Was your first work created inside a studio or on the streets?

BTOY:  I didn’t start to paint in the studio, I started to paint in the street. I had friends on the street and we painted together in different styles. That was my first experience with [spray] cans. People from Sweden, from France, from England came to Barcelona and painted a lot of graffiti and street art. And step by step I developed my style. 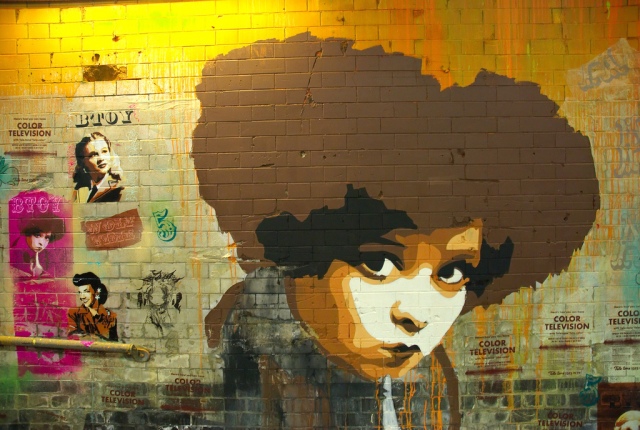 A work by BTOY created for the Banksy-hosted 2008 Cans Festival of urban art in London, England (photo by lultimavoltache, Flickr Creative Commons, May 4, 2008)

I think at the beginning it is very important to learn from other people. You see the technique of your friends and get feedback like, “Use this colour for this, or use this paper and material.”

AM: How did graffiti laws change your work? 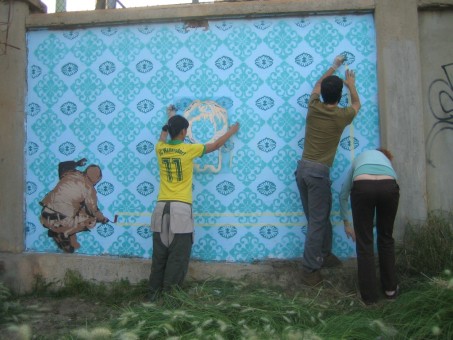 BTOY: In 2002 there were no laws against graffiti in Barcelona. We could paint with many people in a big place in the centre of the city and the cops would just say, “Hello, hello.” But laws against graffiti started in Barcelona in 2005. I started using posters because the poster is very easy and fast. It only takes one minute to put up a poster. If I paint a stencil with five layers on the street it takes 20 minutes and it is very dangerous.

AM: So you create a stencil first and then put it up?

Amy Winehouse in street art by BTOY on a wall near her Barcelona studio (photo by Anita Malhotra, February 24, 2012)

BTOY: Yes. Normally I paint the poster in my studio. Later I put it up with hard glue and a brush. The people who clean the city hate me.

AM: You traveled to many cities to do your work. Tell me about that.

BTOY: I went to Paris and London and the experience was nice, but it’s Europe, and the society is competitive. Jakarta was amazing. I think all places are interesting if you can meet the people who are from there. In Mexico, people are very curious and they want to learn about your art. I don’t like to go to a place and just be a tourist. 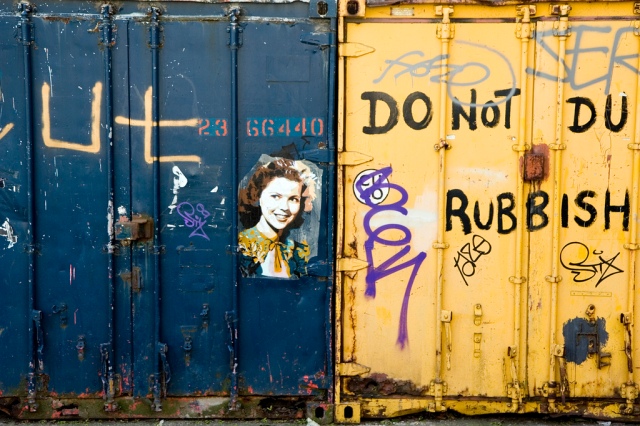 AM: Where have you gone?

BTOY: In Europe – Poland, Germany, France, England, Portugal; in Latin America – Mexico, Argentina. I’ve never been to the U.S., but may go sometime this year or next year. And I went to Indonesia last year for an international stencil project.

AM: When you go to places like Portugal or Paris, do you go for art or did you just go to travel?

BTOY posing in front of a painting in her 2010 solo exhibit at Barcelona’s Espai B gallery (Flickr Creative Commons, June 23, 2010)

BTOY: It’s a mixture. Sometimes it’s for a project; sometimes it’s for travelling and painting illegally in the city. For example, I will go to Amsterdam next week to paint one little mural, but we will paint on the street with posters too.

AM: How do you choose a place on the street to put your art?

BTOY: I normally put posters up in decadent places. I like old places, and for me going in the streets is a discovery every time. You can see the rust on the door, you can see the [graffiti] tag on the door. You can see a hole or the paint of the door – for example, if the door is green but another layer is grey or white. Covilha is a little town in Portugal. The centre of the city is completely abandoned – a lot of houses are abandoned. Barcelona is different. In Barcelona you can see a lot of tags and rust. Each time, you need to see the typography, the texture of the place – if it’s a good place or not. For example, I don’t like a new building because for me it’s very cold.

AM: Do you have a favourite city?

BTOY: I like Lisbon a lot for the decadence of the city. There are a lot of rusted and broken doors, and a lot of posters on the street.

AM: When did you begin exhibiting in galleries and painting on canvas?

A painting by BTOY is featured on a poster for a Barcelona street art painting exhibit (photo by http://www.urbanpainting.info, Flickr Creative Commons, March 3, 2009)

BTOY: In 2006. I have works on the street and in galleries, but for me the street is very important because if I only painted on canvas, then I wouldn’t be a street artist.

AM: Tell me about some of the exhibitions you had last year.

BTOY: Last year, I had a solo show in Bergamo, Italy. Later I had a collective show in Jakarta, Indonesia, and I painted two boxes on the street. This was a government project. In 2010 I painted a train station in Warsaw. The government organized this festival.

AM: Tell me about the mural you’re going to do in Barcelona.

BTOY: I will paint a woman – Margarita Xirgu. She was an actress of the ‘20s, but in 1936 the Civil War started in Spain and she moved to Argentina and never came back to Spain. She died in Uruguay and worked in the theatre and was very important. She worked a lot with Garcia Lorca and Valle-Inclán, big Spanish writers and playwrights. I think this woman needs a little tribute. It is a project with the government based on my idea.

AM: What do you want to do with your art in the future?

BTOY: I think more big murals, working in the studio for shows, continue working as a teacher, and trying to evolve in my work.