In his 45-year career as a guitarist and singer-songwriter, Ottawa-born Bruce Cockburn has produced 31 albums of passionate, evocative songs based on his personal experiences and his observations while travelling, often in war-torn countries and in a humanitarian role.

With more than seven million records sold, he has been honoured with 13 Juno Awards, 21 gold and platinum certifications, membership in the Canadian Music Hall of Fame and a Governor General’s Performing Arts Award. In 1982, he was made a Member of the Order of Canada, and in 2002 was promoted to Officer.

Last year, Cockburn published the extensive, very personal memoir Rumours of Glory, which details his childhood, travels, humanitarian work, personal relationships and spiritual search as well as the stories behind many of his songs.

Anita Malhotra spoke to Bruce Cockburn, who now lives in San Francisco, by telephone about his life and music on June 12, 2015.

AM: You turned 70 a few weeks ago. Was turning 70 any particular cause for reflection?

BC: It’s cause for alarm more than reflection! I put so much reflection into writing the book that it wasn’t, really. It’s like, “Okay I’m 70 now,” and I wrote this book and the book has all this stuff in it, but I think that that kind of superseded any information to be overly reflective of on my birthday. A bunch of us were gathered in a little resort town in Delaware at the end of the northeastern U.S. tour that I was doing through the month of May, and there was a lot of eating, drinking and merriment, and that’s what I was thinking about.

AM: Your autobiography Rumours of Glory is very personal, very honest. Was the process of writing the book cathartic for you?

Bruce in 1947 as a toddler with his parents in Kingston, Ontario (photo courtesy of Bernie Finkelstein and Bruce Cockburn)

BC: Not exactly. It was instructive in certain ways and it was an interesting process, by turns gratifying and kind of exciting, and horrible. The horrible part had to do with deadlines, mostly, and with a couple of points where I got stuck and didn’t know how to proceed. But the chief one of those was remedied by engaging Greg King to be a co-writer on it. I’m not really given to a lot of rehashing the past. I’ve never been much for going back and sentimentalizing things, or being perturbed by things other than the things that have gone into my make-up that have to be exorcized either by time or by psychological or spiritual effort.

I think it came out to be an interesting story – in certain ways representative of the second half of the twentieth century. In some ways I think my life’s pretty representative of everybody’s life during that period. But because I’ve gotten to travel and be engaged with certain manifestations of the big political strokes – the Cold War and the proxy wars that were associated with that, for example, and post-colonial upheavals – I got to see them up a little closer than a lot of people did.

AM: What have you learned from visiting troubled places in the world as part of your humanitarian work?

Bruce Cockburn performing while on a 1985 mission to a refugee camp in Colomancagua, Honduras (photo courtesy of Bernie Finkelman and Bruce Cockburn)

BC: I learned how to have fun in troubled places. It’s a slightly glib answer, but one of the things that really jumped out, especially in the trips to Latin America, is how ready people were to enjoy what they could of their lives. It put the kind of morbidity of a lot of politically involved people in Canada that I was acquainted with into perspective.

I learned what it is to be physically afraid – living or travelling in a place where really bad stuff can and does happen. That can happen at home too, but the likelihood is different in a war zone and the atmosphere is so different. It’s one of precariousness that everybody seems to feel. And for that reason there’s a greater degree of warmth and openness among the people that you’re thrown together with.

And then I learned a lot about global politics through travel in places where the political maneuverings were made manifest in very hands-on, immediate ways.

AM: Your songs and performances are very passionate. What are some of the emotions behind this passion?

BC: Like every other artist I have the temerity to think that people will be interested in what I have to say, and so I’m standing up and going, “Look at me. Listen to me. I’ve got something to tell you.” But it’s really down to the song. Songs – from an emotional point of view for me – are like a scrapbook. Whenever I sing a song like “If I Had a Rocket Launcher,” I go exactly right where I was when I wrote it. It’s not a good feeling at all, but it’s part of the process of performing that song that came from the heart. And the same is true of the more cheerful songs, of love songs, and so on. They all represent a place and time and set of events that the songs don’t necessarily record exactly, but they’re snapshots of.

AM: You’ve spoken and written about your spirituality. What has been the role of the higher power in your life?

BC: I feel like I’ve been pushed and prodded and led and steered by hook or by crook through a course that led early on to an interest in a relationship with God. I’ve taken a conscious hand in that to some extent, but I really feel every now and then something happens and I know that that big finger’s stirring the pot. I speak very metaphorically here because I don’t think God has fingers, although I guess he could if he wanted to. I’m still working on it and I’ll be working on it till I’m prevented by death or whatever. Maybe it continues after that – it might well. However much I don’t pay attention to it from moment to moment, it’s still at the centre of everything and it shows up in a lot of songs and it shows up in a lot of elements in my life. 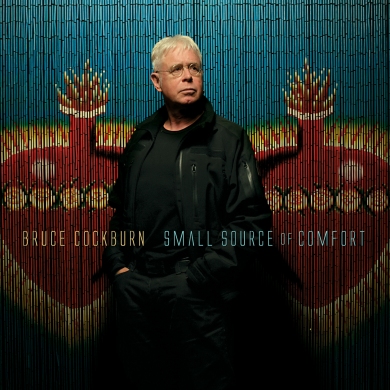 Bruce Cockburn’s most recent album, “Small Source of Comfort” (2011). The next three years were mainly spent working on his 2014 memoir “Rumours of Glory”

AM: What musical accomplishment are you most proud of?

BC: I don’t really think about that stuff too much. I suppose gaining the skill that I have with guitar would be something I’m pleased about. What there is that’s better than pride is a sense of actively doing something meaningful when I’m performing the songs or when I’m sitting around practicing, for that matter. I am grateful for that, but I felt pretty proud to have a stamp. I don’t think it’s a musical accomplishment – it’s related, but I didn’t do anything musical to get a stamp. And I didn’t do anything musical to get to be an Officer of the Order of Canada, but I’m kind of proud of that because I feel like a Canadian and I feel touched by an expression of a membership in the collective consciousness of Canada.

I don’t relate it to politics. When Mulroney got made a Companion of the Order, I almost sent my membership in the Order back. I thought, “I don’t want to be in the same organization as that jerk.” But then I thought better of it. It’s bigger than that. So I stuck with it, and I eventually got promoted to Officer. But unless I get to be Prime Minister or something, I’m not likely to be a Companion.

AM: What is your daily routine like if you’re not touring?

BC: I get up about six o’clock, I get dressed, I take my daughter to daycare. Then I get done for the next few hours whatever it is I have to do that day. It may or may not include some practicing – hopefully it does. It includes things like laundry – I’m sitting in front of the laundromat right now. So I just get stuff done, and then around five o’clock I go get her again and then we have dinner and then I go to bed. That’s my routine.

AM: How old is your daughter now?

BC: Three. I have an older daughter who has four kids of her own, but the young one is three. 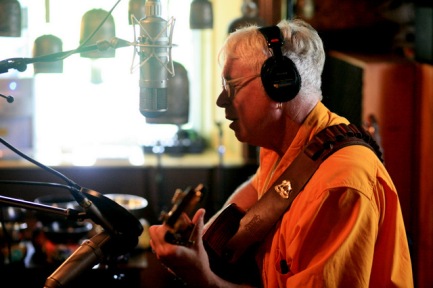 AM: You’ve donated your notebooks and other archives to McMaster University. What can be found in these archives, and why did you do that?

BC: They extended the invitation to do that and I thought, you know, I’ve saved a lot of junk over the years and I might as well give it to them. I say junk, but most of it isn’t junk – most of it is stuff that is part of the story. We made liberal use of the archives in writing the book. My old notebooks are part of that collection – that’s probably the most significant part of it. There’s posters from travels, from touring, some European posters, stuff like that. There’s a couple of guitars that have been in videos or that were part of my stage performance for a while. There’s quite a lot of stuff, actually. A lot of demos and rough mixes of albums and stuff like that too.

AM: What are some of your upcoming projects? Do you have album in the works?

BC: I’d like to have but I wasn’t a songwriter for the three years I was writing the book. I was an author. Now I’m a songwriter again. I’ve got a few new songs, but not enough to think about doing an album. And I’m not sure anymore whether albums are appropriate even. I still think in terms of albums, but most of the rest of the world doesn’t. But I do have the intention of eventually coming out with new stuff. Beyond that, I’ve got a bunch of touring that’s going to keep me busy. Between being at home with my family and kind of balancing that with being on the road, I’m booked up until December.

AM: What material are you featuring in your upcoming tour and what will you be performing at the Ottawa Jazz Festival?

BC: I’ve got some rehearsals coming up next week in Toronto with Gary Craig, who plays drums, and Roberto Occhipinti, the bass player. It’s interesting because we’re doing the Montreal Folk Festival and the Ottawa Jazz Festival back-to-back. I think it will be an interesting mix of older and newer and the familiar and the obscure. I want to try to allow as much jazz into the performance that I can. Roberto comes from that world and is a very fine musician, so I’m hoping that there’ll be some interesting interplay between all three of us. Gary and I worked together a lot before, so he’s more of a known quantity. But it should be pretty energetic and it should be a cross-section of stuff. I’ll be playing a couple of different guitars and trying to remember the words.

Bruce Cockburn performs at the Théâtre Paradoxe in Montreal on June 19, 2015 and at the Ottawa Jazz Festival on June 20, 2015 followed by dates throughout the summer in Canada and the United States. For more information on Bruce Cockburn and his music, visit brucecockburn.com.